The original article was published on September 30th, 2018, in Highwire Lab. The site no longer exists, so I transferred the writing to this blog. 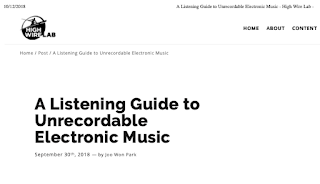 On November 30th, 2018, artists and researchers from the University of Michigan, Michigan State University and Wayne State University will hold a concert and a symposium on live electronic music. Particularly, the event will feature various technologies developed for performances and installations rather than those designed to improve or facilitate recording and mixing. During the symposium, the presenters will discuss how the recent development and research in performance technology are changing the way we present, experience and think about music. They will also express and share their artistic ideas through the technology in the evening concert.

This article provides four guidelines on what to listen for in the evening concert, as there will be performance practices that are not regularly present in non-electronic concerts. I believe that the guidelines could be used for any concert highlighting performing technologies, such as newly developed instruments, laptop ensemble, live coding and electronic ensemble in general.

1. Find Sounds That Are Uniquely Electronic

The first listening activity one can do in an electronic music concert is to question whether the electronic instrument and their sounds are the most suitable choice for the performance. If a sound can be made better by human and acoustic instruments alone, perhaps it is best to present them without electronics. Otherwise, there is a risk of the electronic part being an unsatisfying imitation of the acoustic performances. In my experience, an electronic piece is interesting when the composers and the performers let the machine act like a machine.

The machines, particularly the computers, can do certain tasks better than the humans. A few lines of code can make instrument repeat tasks with precision. The human operator can also let the program to make objective choices. Playing the note C for 1,435 times in 10.234 seconds, while randomly shifting octave positions is not so daunting for a computer program. Using a machine is sometimes the only way to test or realize a composer’s idea. The audience may search for the activities on stage that can only be done with the aid of technology and see how it is applied in a musical context.

Another function of technology in performance is to extend the sonic capacity of the known instruments. Listen for those sounds. In Armor+2 for clarinet and computer, I created an algorithm to extend the physical limitation of a solo clarinet performance. The computer part processes the sound of the clarinet to add harmonies, extra parts and multiple room characteristics. I chose the computer to add harmonies instead of an ensemble because the added pitches are the result of a mathematical function involving probability, and the range and timbre of the computer part seemed impossible to be realized otherwise. The phrasing length of the repeated computer part is also chosen by an algorithm so that the performers and audiences listening to the piece in multiple performances may listen to similar but slightly different versions.

2. Find the Limitations Imposed by the Composer

Focusing on uniquely electronic sounds can initially excite the composers, performers and audience. I doubt the fascination will hold for the duration of the piece unless the electronic sound is an integral part of the composition. For me, an electronic music composition is a process of choosing some sounds among all other possibilities. When any and every sound is possible to record, synthesize and playback with the use of technology, the composer’s decision as to what not to do is as interesting as what to do.

Alvin Lucier’s works are my inspirations for making conscious compositional limitations. In I Am Sitting In A Room and Music On A Long Thin Wire, Lucier focuses on a single idea or process that he wants to share. Then he subtracts everything else. The “everything” often includes conventional notions of melody, phrase, ensemble and other elements of musical patterns and organizations. By eliminating these elements, audiences are directed to listen for sonic phenomena caused by the interaction of the electronics and the acoustics: the room reveals its harmonic contents through a repetition of a specific recording process, and an interaction between a wire, magnet and audio signal creates continuously changing timbre. I delight in listening to a piece that focuses on a clear and novel idea because it leaves room to imagine what composers decide not to do in order to achieve his/her goal.

In one of the lessons during my graduate study, my former teacher and I discussed that a compositional decision is like choosing a meal from a menu. The choice I make in creating a piece is not like finding one correct answer in a multiple-choice test, but rather picking one among all potentially good choices. In Hallelujah for vibraphone and computer, I wanted to pay homage to Lucier and focused on one idea while letting other things go. I took advantage of what a computer can do best (i.e. following precise instructions unbiased) to create a beat pattern from slight frequency differences between the computer and the vibraphone part. Think of an old out-of-tune piano, but it is a vibraphone instead and the detuned state is changing at every note.

3. Listen For the Composed Space

I was introduced to Lucier’s music by listening to his albums. I am grateful that my school’s library had those recordings, but these pieces made a true impact when I heard them live in a concert hall and a gallery. When Music On A Long Thin Wire was installed in a gallery, unpredictable patterns of the magnetized string and external stimulants such as the wind and the visitor’s actions guaranteed different timbre for each visit. In an I Am Sitting In A Room performance, I was delighted to discover the hidden harmony of the concert hall I thought I knew well. As each step revealed more resonant frequencies, I could hear the whole space; left, right, up, down, close and far, gradually being tuned to a giant instrument. The performance of I Am Sitting In a Room relies on the recording technology, but my favorite experience of the piece requires me to be in the acoustic space not different from the one the technology is in. The listening space and how the sounds are presented in that space are as important as the piece itself.

I propose that the audiences treat the space in which the electronic sounds are being projected as a part of the composition. A precise and deliberate control of spatial position is what electronic sound can do better than any acoustic instruments. Some pieces use eight or more speakers to move the sounds around. Some pieces are written and presented for the specific place’s acoustics. Like a well-composed melody, a thoughtful composition of the space can narrate and express. In Singaporean Crosswalk for laptop ensemble, I tried to capture the busy streets of Singapore where the man-made sounds and the natural sounds are blended into a unique soundscape. The score instructs four to 12 performers to walk around at the performance space with their device to evoke the constantly moving and changing sonic landscape. The linked video shows how one version of the piece was performed outdoors. Note that this could not document the audience’s spatial experience which I thought was the most interesting part of the piece.

4. Play With the Electronic Instruments

One of the enjoyments in experiencing music live is witnessing the expertise of the performer. I play a little bit of guitar and have enough tactile experience to understand that what I see and hear from a professional guitarist on stage is a result of hard work and dedication. I admire the guitarist and his/her ability rather than the quality of the guitar itself. In an electronic music concert, there could be a reverse situation where the instrument itself is perceived as a focal point for admiration. The difficulty of sensing the performance expertise in an unfamiliar electronic instrument may lead to an assumption that the musician’s actions on the stage does not require practice or are irrelevant. If the listeners can sense or gauge the electronic musician’s performance expertise more accurately, their concert experience could be more valuable.

One way to develop critical ears and eyes for technology-based music is to gain experiences in creating or performing electronic music. It is easy to access a digital audio workstation, a program used for recording, editing and mixing, from any computer platform or mobile devices. The price of many electronic instruments also became affordable, and there are cheaper (or free) software instruments that users can download. Use them, get familiarized in them and make some unique electronic sounds. Open Garageband in a Mac and record/mix some tracks. Find ways to compose or manipulate the space. Play the synthesizer along with the musicians playing acoustic instruments. Doing musical activities with electronics, however little or brief, will give the users a basis for appreciation and critical listening.

Another hands-on activity I recommend is to record audio. With mobile devices and affordable recorders abound, anybody can record sounds at any time. When consciously looking for an interesting sound to record, the recordist listens to their surroundings differently.   Recording the nature, people and the culture were the best ear training sessions during my graduate school years. By concentrating to find and archive sonic signatures in places, I learned to find musicality in everyday sounds. Perhaps the concert attendants use their phones to record some interesting environmental sounds prior to the concert as a warm-up. New music performers cannot ask for anything better than actively-seeking ears and curious minds!

The four guidelines are my attempt to answer questions asked by friends and audiences attending my concerts. Inquiries such as “what were you doing on stage?,” “what was I supposed to listen and appreciate in that piece?,” “how is this live version better than listening to a recording at home?,” etc. are challenges and inspirations for my compositions. What I like most about my field is that, as you may witness in the November 30th symposium, my answers to the challenges of presenting electronic music are quite different from the answers of my colleagues. I named this symposium The Unrecordables since the essence of the music that will be presented are impossible to be captured and archived with current technology. I invite you to come to the symposium, apply the guidelines provided in here and find your favorite ways in which the music technology is used on stage. 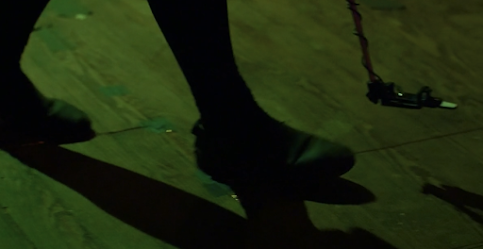